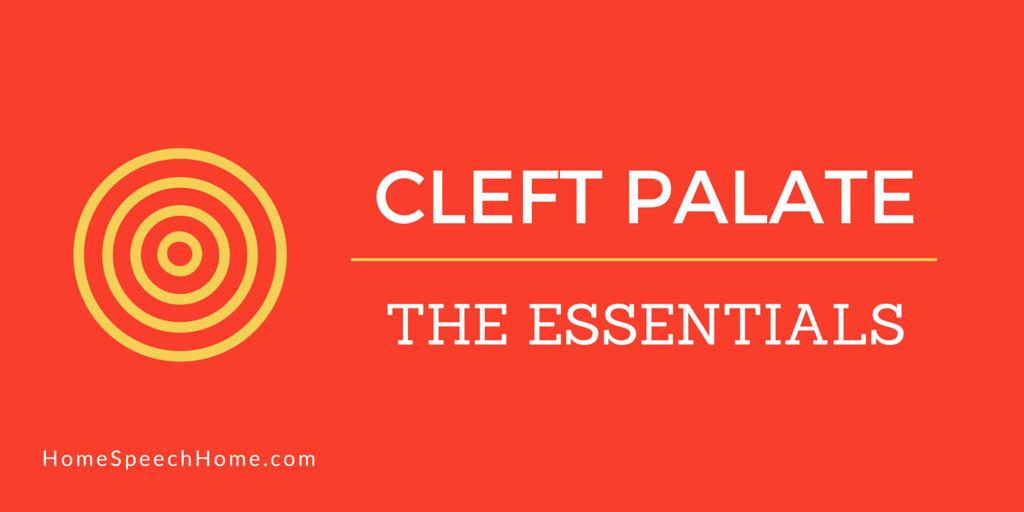 What is a Cleft Palate?

Along with cleft lip, it is the most common type of birth defect with Down Syndrome being the second most common.

Cleft palate speech therapy is given to most every person born with cleft lip or palate. We discuss this more below.

If you're looking for really technical infomation on cleft palate please refer to a medical website...

...we want this page to be easily understood.

A cleft is an abnormal opening in a part of your body that should be closed.

Clefts are certainly not limited to these two areas.

Cleft palate and/or lip are something people are usually born with. They can be acquired after birth from trauma or disease.

A person who is born with it can have the following:

This is further subdivided into the categories of:

Cleft lip occurs twice as much in boys than girls.

Cleft lip and palate occurs twice as much in boys than girls.

Cleft palate only occurs twice as much in girls than boys.

Cleft lips are typically repaired early around 10-12 weeks and cleft palates are repaired between 6 and 18 months. Children often have follow up surgery for oral and nasal reconstruction.

The following shows how often clefts happen in some races:

What is a Cleft Palate Disorder?

Cleft palate itself is not a disorder. As mentioned before it is simply an abnormal opening. Abnormal openings in parts of your mouth, however, can cause serious issues with someone's ability to make speech sounds.

As far as clear speech production goes, the biggest issue that Speech-Language Pathologists work with is hypernasality caused by velopharyngeal inadequacy.

This is when the most rear part of the soft palate (called the velum) will not reach far enough back in the throat to stop air from going through the nose (nasal cavity).

There are 3 types of velopharyngeal problems that usually warrant cleft palate speech therapy:

If you have ever watched "The Nanny", Fran Drescher is a simulated version of someone with hypernasality.

A real example of hypernasality in a 5 year old boy can be seen here.

Or an example of hypernasality in a 17 year old girl with velo-cardio facial sydrome can be seen here.

She would be a perfect candidate for cleft palate speech therapy.

The opposite of hypernasality is hyponasality, when little to no air goes through the nose. If you have ever had a cold and been "stuffed up" you know what I'm talking about.

If you haven't, the next time you have a cold try and say an m, n, or ng sound.

It is impossible to say those sounds because air flow from the lungs is blocked from going through the nose by whatever "stuff" is in there.

Before reading this, keep in mind that unless a pregnant woman purposefully exposes herself to harmful "things"...

...a parent does NOT cause a cleft.

Clefts happen during the 6th-10th week of development inside a mother's belly. During this time of development the baby's hard palate is separated, but comes together and fuses to form the roof of the mouth.

A cleft happens when something interrupts or gets in the way of the fusion.

So what gets in the way? We know of five main causes:

Mechanically Induced - something blocks closure of the palate

Almost all of our body parts are connected, especially around the mouth and head. When a cleft happens it affects other body parts and functions.

The following can be affected:

Save tons of time writing your next report with 90+ SLP Test Descriptions!

Speech-Language Pathologists work with children who have cleft lip and/or palate to make speech as clear and as normal sounding as possible. In order to do this they must determine if a sound error is a:

SLPs use a variety of low and high technology tools that provide feedback to them in different ways.

Each of the above examples help a child work on decreasing air that comes out of their noses.

Depending on the severity of the cleft, some children don't have the ability to produce sounds in the right place inside their mouth.

SLPs also teach children alternate places they can make speech sounds in their mouth when necessary.

First and foremost...be informed about the options for you child. Advances in cleft palate and lip repair give parents a lot of options. Some options will fit your child's needs better than others.

Work with them as a team. Keep them informed and ask them to do the same for you.

Find a Speech-Language Pathologist with a background or specialization in cleft palate speech therapy.

Every stage of your child's development is crucial and an SLP will be there to help your child reach them.

If you live near a University that has a communication science/disorders program, they should have a treatment clinic. This will be a great resource for you.

They charge less for therapy than a private therapist would and they usually have access to the newest research and technology that will most help your child.

The National Craniofacial Association - has detailed info. about 28 different disorders, along with support networks for families.

This website also helps you locate craniofacial teams in your state.

Get the Multi-Syllabic Words Flashcards for only $ 9.99