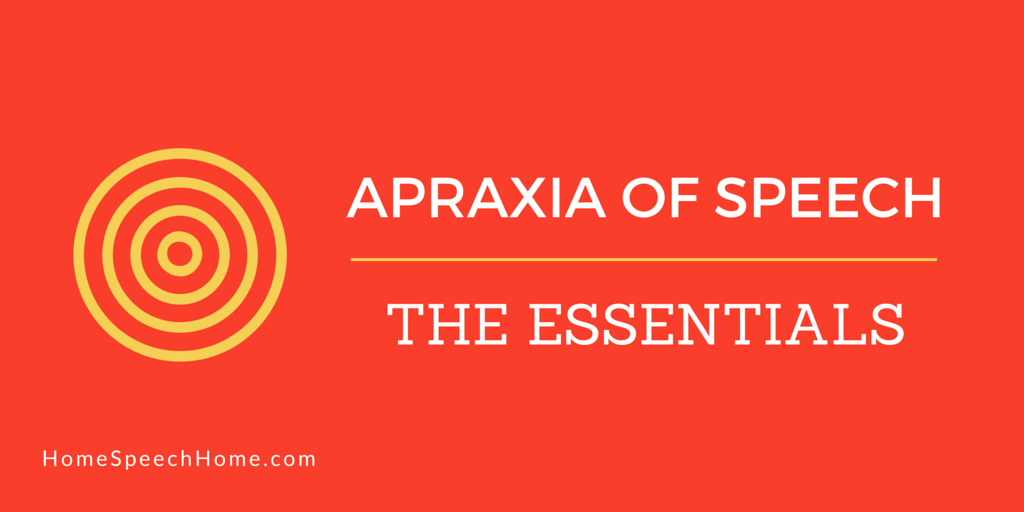 Apraxia of Speech: Understanding the Essentials

It's when the brain fails to plan and coordinate muscle movements for specific actions.

Also referred to as...

This disorder happens when the signal from the brain is changed or broken on it's way to the mouth.

Every word that comes out of our mouth is planned by our brain before we say it. Our brain works very fast to put sounds into words and words into sentences.

..."like", the brain is giving our mouth "time to catch up" with the signal it is sending.

When that signal gets changed or broken, it makes voluntary movements for sound and word production difficult (see examples below).

Just to be clear, apraxia of speech does NOT mean someone has weak mouth muscles.

You can read here about one mother and daughters journey with apraxia.

What Is an Apraxia of Speech Disorder?

There are two types that involve Speech Pathologists:


Example: The person can randomly stick their tongue out at you, but if you ASK them to do it... they can't.

VERBAL (more common) - the person has problems with their ability to plan and program voluntary movements to say sounds and words.


Example: If you ask the person to say banana 4 times, they might say...


Apraxia of speech can be:


Developmental, which affects children from birth.

Acquired which can affect a person at any age, but most often affects adults.

Similar to some speech disorders, SLPs are not sure what causes it. Like adults, children can get acquired apraxia from a stroke, tumor, or head injury. Apraxia of speech seems to affect more boys than girls.

Caruso & Strand (1999) compiled some common factors they looked for when evaluating a child who was thought to have developmental apraxia. They suggested that apraxia of speech may be present if:

They also noted that young children with this disorder might have:

A child can be mild enough that they may only have one or two speech errors or occasionally struggle with some multi-syllable words...

...severe enough where a child cannot communicate at all (only says vowel sounds) and needs/uses another way to communicate such as sign language or a communication board.

If a child has a motor deficit it will more than likely influence the development of phonology and other language abilities (Caruso & Strand, 1999). Apraxia of speech may or may not affect:

Speech-Language Pathologists have a variety of approaches they use with children who have apraxia.

Different approaches focus on 4 types of cueing, such as:

Therapy should be frequent, intense, and focused. Haynes (1985) summarized the techniques she would use from her research on apraxia of speech. She said she would use:


What Can I Do About It?

Shelley L. Velleman Ph.D., CCC-SLP offers some excellent tips for what parents can do for their child when working with them at home.

She suggests that low-pressure verbal activities are the most important thing parents can do to help. Some examples are:


She encourages parents to turn everyday activities into verbal routines by making up poems, songs, or sayings about them:

She recommends labeling instead of counting objects in books:


When reading a book and you come across a picture of more than one thing(ex. 2 or more dogs).

Instead of saying "Two dogs"


When setting the table you can say

As boring as it might sound, this is easy to do and easy to make fun. So go ahead and act silly, be over dramatic, and repeat words 4-5 times or more.

Will you feel weird?... Maybe.

Will there be times that you don't want to do it?... You bet.


Will it help your child?... Absolutely!

If you have seen some modern day cartoons, they repeat things A LOT! That is because we learn by repetition.

is excellent at doing this. They have one song about Dora's Map.

The song has two very short verses and then the singer says "I'm the map" 12 times straight! and the song is over.

Above all, and this is always easier said than done...exercise as much patience as possible. This disorder is very frustrating for the individual and can be for the whole family.

If you suspect that your child has apraxia of speech, see a Speech-Language Pathologist right away. They will be able to discuss your options including the possibility of using sign language and/or a communication board.

Back to top of apraxia of speech

National Institute on Deafness and Other Communication Disorders (NIDCD)